We are pleased to share with you our performance for the Financial year ending 2017-18. Even though the market corrected sharply in the last two months of the fiscal, we have outperformed major indices. This is despite only deploying 77% of the funds in equities and thus taking lower risk. (Table1)

Apart from absolute performance, we suggest investors  focus on risk adjusted performance. We did quite well on this measure (Table 2). Please refer to the paragraph at the end of this note for explanation of each of the measures. 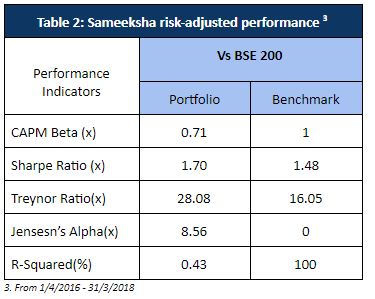 As we had mentioned in our investor letter last year, we invest based on bottom-up analysis and follow a strict absolute return criteria. As such, if we don’t find enough investment ideas that meet our criteria, we hold available funds in liquid form. In other words, we don’t follow the  “almost always fully invested” approach. In fact, we had deliberately taken an aggressive cash call (Cash level above 30%) in the fiscal 2018 post budget announcement. However,  we felt that given very strong criticism across the market of the budget, there may be corrective measures and hence we chose not to increase the cash position.

Below are the list of top stocks that we maintained holding onto from previous fiscal, exited or have entered our top holdings list. (Table 3) 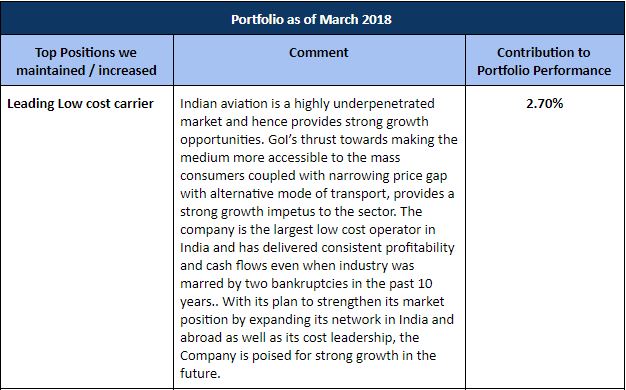 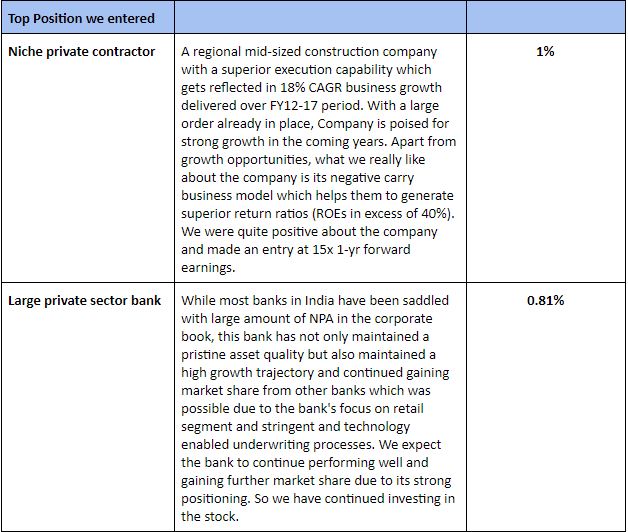 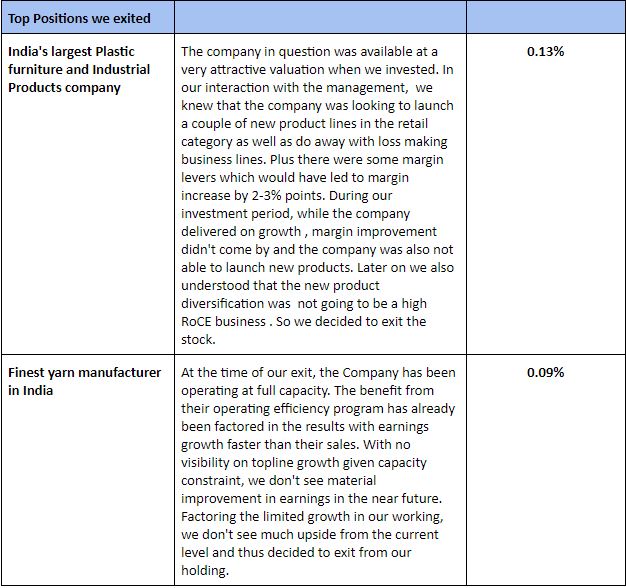 Fiscal 2017-18 had been an eventful year , where we witnessed an overhaul of the Indirect Tax system with the implementation of Goods and Services Tax (GST). There have been opinions on its hasty implementation, the number of tax slabs and return filing, however, the government has been taking corrective measures to address the issues.  Long Term Capital Gains Tax (LTCG) was another event which dampened the sentiments of the investors having been reintroduced after 14 years. We witnessed a sharp sell off in the market.

Much of the negative sentiment in the market can also be attributed to the ongoing US – China trade war and political uncertainty. While both the countries continue imposing tariffs, a potential trade war can have a substantial risk to global economic growth, Other factors such as rising NPAs in the PSU banks have also weighed negatively on the investor sentiments.

Amidst the market correction, valuations have come off which gives a good start to this fiscal.  We expect the markets to remain positive on the back of earnings recovery, however, global geo-political tension takes the center stage and may impact global markets adversely if the US-China trade war intensifies and if both countries fail to reach concrete agreement.

Keeping the current global and economical situation in mind, we continue to stay invested in the companies where we believe will deliver superior absolute  as well as risk adjusted return.

Jensen’s Alpha: Jensen’s Alpha is the difference between actual returns of a fund and those that could have been earned on a benchmark portfolio with the same amount of market risk (e.g. the same Beta).

R-Squared: R-squared measures the relationship between a portfolio and its benchmark index. It is expressed as a percentage from 1 to 100. A high R-Squared indicates portfolio movement similar to that of the benchmark.